SIGN & SYMPTOMS OF HYPERTENSION:
As before knowing that someone having hypertension, they do not show any sign and symptoms but here are some typical sign and symptoms which a hypertensive person may or may not show. These are as follows:
·         On physical examination there is elevated BP level of more than 140/90 mm hg for two consecutive readings.
·         Occasionally, retinal (eyes) changes that are haemorrhages, redness, exudates.
·         Pathological changes in kidneys (increased level of creatinine in blood)
·         Alteration in vision & speech
·         Dizziness
·         Weakness, sudden fall

TREATMENT OF HYPERTENSION
When the BP is uncontrollable by changing the life style then "Adjuvant therapy" that is pharmacological therapy is started. Main classes are:
·         Diuretics
·         Beta-blockers
·         Vasodilators
·         Calcium channel blockers
·         Angiotension converting enzyme inhibitor

Expertise Health Tips to Maintain Your BP:
The following flow-chart telling the various methods to control and maintain your BP. 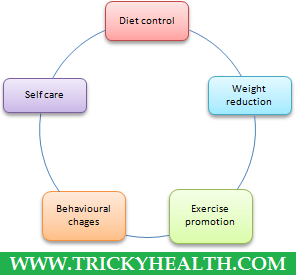 As BP control is in our own hands, so here we are telling you various daily heath care tips by which you can control and maintain your BP as well as a good health.

CONCLUSION
As hypertension is a life-long condition and if not treated at time can lead to many adverse effects such as heart attack so it is the individual self responsibility to have a control on it by changing his/her life style that means to have a control on diet, exercise, weight, smoking, alcohol and to follow the instructions given by physician. As one’s health is in his/her own hands so let’s not ruin it anymore be respectful to it and enjoy the healthy life as somebody says it correctly “HEALTH IS WEALTH.”


INTRODUCTION:
Hypertension is mainly a heart related problem. In a lay man language it is high blood pressure. It is the abnormal elevation (rising) of the blood pressure than normal. It is also called “SILENT KILLER” because the people having it are symptom free means before checking their blood pressure (B.P.) they were unaware of it because previously they were not having any sign of it, so it is very important to have your regular BP check-up. As soon as you come to know that you are having hypertension then it is very important to have your regular BP monitoring because it is a life- long condition. In medical language hypertension is defined as a systolic pressure greater than 140 mm hg and a diastolic pressure greater than 90 mm hg monitored over two consecutively BP Measurements  by a licensed health professional. It is very simple to understand that as our BP comprises of two values that one is upper value called systolic pressure and a lower value called diastolic pressure. The normal person’s BP is 120/70 mm hg means 120 mm hg is the systolic pressure and 70 mm hg is the diastolic pressure .A person is said to be hypertensive when his/her BP is greater than 140/90 mm hg of two regular readings taken by a health professional. Hypertension is the major health problem it accounts for 20-50% of all deaths.
CLASSIFICATION OF HYPERTENSION 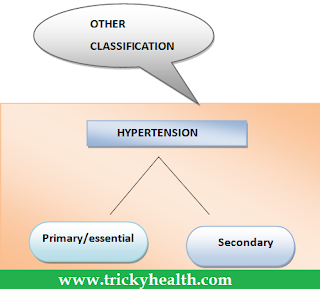