INTRODUCTION: A common skin trouble that affects many 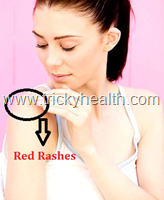 people is the sudden appearance of red rashes on the skin, which may occur totally unannounced and take one by surprise. The moment one feels some itching, one is inclined to scratch the part and immediately after scratching the part, red rashes or wheals appear on the skin. These rashes or wheals may itch or burn and may stay for some time after which they settle down. In medical parlance, this condition is known as urticaria. Urticaria or “hives” as known in English is derived from a Latin word “urtica” which means nettles though urticaria has nothing to do with nettles except that it causes itching and stinging as caused by the weeds of the nettle family.

1). ALLERGY: Usually, allergies are the cause of this trouble though it is difficult to pinpoint the exact allergen. Most of the time the offending allergen is too inconspicuous to be detected accurately. This makes it difficult to avoid the recurrence of this trouble as one does not come to know the source of the trouble.
2). ALLERGY TO FOOD ITEMS: Some people may be allergic to common articles of food as chocolates, nuts, wheat or milk.
3). EXPOSURE TO EXTREME OF TEMPERATURE: Other known causes of urticaria are exposure to cold, heat, sun, alcohol, drugs, exercise and emotional stress.


CHEMICAL REACTION IN BODY DURING URTICARIA:

The swelling that is seen in the skin rashes is caused by the leakage of blood plasma out of the vessels into the extracellular space. This remains limited only to the superficial layer of the skin and is caused by histamine which is released from the mast cells. Besides allergic reactions certain chemicals in foods and drugs can also lead to the release of histamine.


1). More often than not, the rashes and the wheals sub-side on their own after some time but are quite distressing for the time they last. They come suddenly, last for a while and fade away on their own. Intense itching prompts one to scratch and often there is bleeding from the areas as the skin is peeled off by scratching. In some cases, scratching does not relieve the itching and may even cause more itching and may spread to the adjacent areas.

2). Applying coconut oil or Vaseline usually helps in relieving the itching and is the better course of action as compared to scratching with one’s nail which can expose the skin to further infection by bacteria and viruses.

3). Role of homoeopathy: The commonly used homoeopathic medicines for the treatment of urticaria are Apis, Natrum Mur, Mezereum, Dulcama-ra and Calcarea Carb. It is very important that the right medicine should be selected after a thorough study of the symptoms. Constitutional treatment with the right medicine is able to cure this trouble completely.

Continue your visit with Tricky Health. We are here to make a healthy World by sharing various Medical Education on very common diseases…